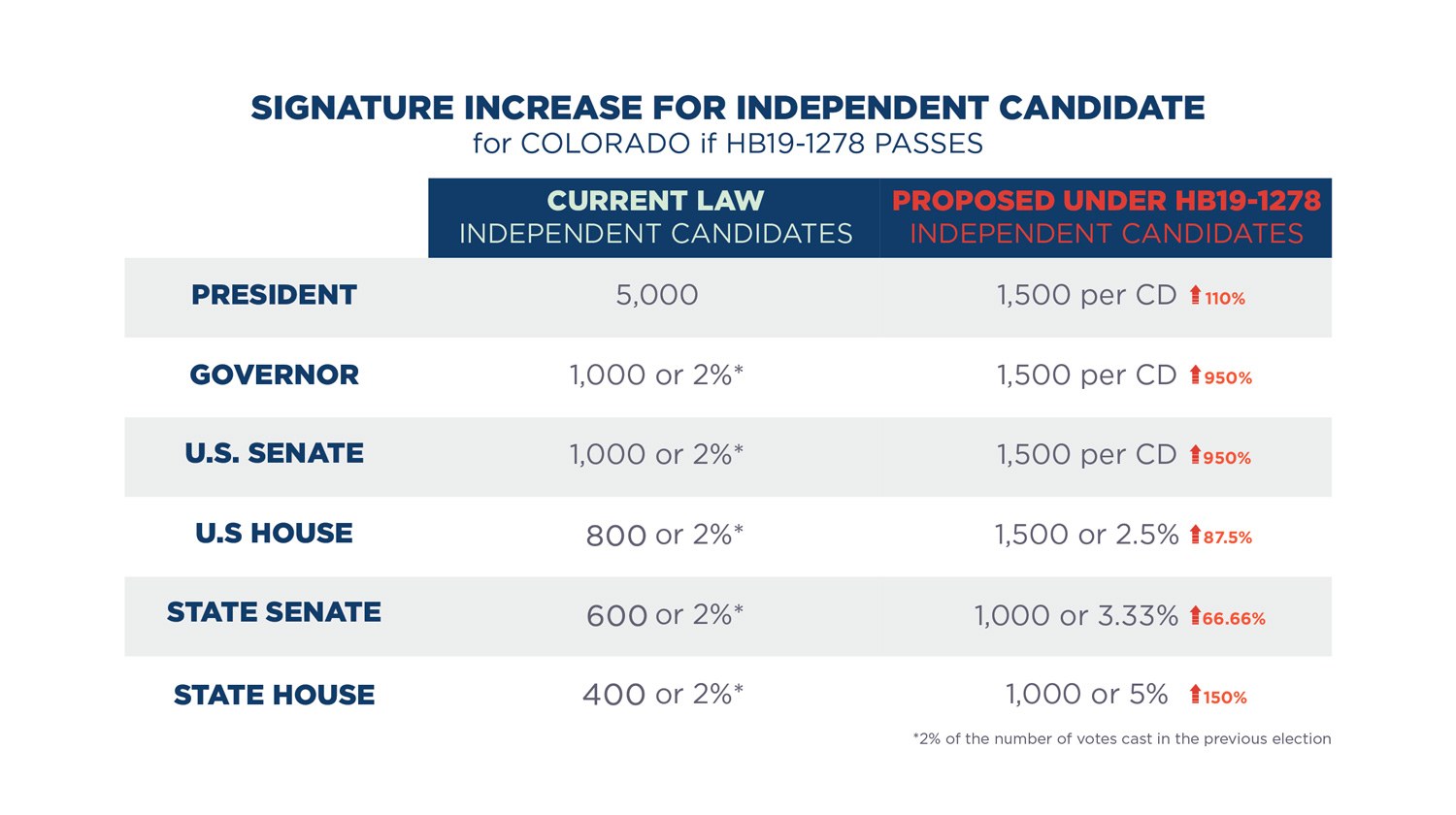 Democratic leadership is attempting to keep independents off the ballot. It's candidate suppression, and it's undemocratic.

Help us fight back.

For independents, getting on the ballot is about to get a whole lot harder.

Leadership in the Colorado state house is trying to push through a last-minute bill that would dramatically increase the number of signatures independent and unaffiliated candidates need to get on the ballot.

SEND A MESSAGE TO YOUR LEGISLATOR NOW.

HB19-1278 moves the goalposts for those outside of the two-party duopoly and does nothing to address the underlying inequalities of the two-party system. Under the proposed legislation, independent candidates would need to gather thousands of more signatures to access the general election ballot.

Gathering petitions is a costly undertaking -- often over $200,000 for statewide candidates.

Instead of easing restrictions to make ballot-access less pay-to-play, the state legislature is doing the opposite, ramping up the stakes, and disadvantaging independent candidates, who have no other avenues to access the ballot.

Most partisans gain ballot access by going through party assembly system -- a route that is generally far less expensive than petitioning. In the 2016 Republican Senate primary, for example, Darryl Glenn, the winner of the Republican Assembly vote spent just $28,100.46 dollars to get on the ballot. Meanwhile, the average petition effort regularly tops out at over $200,000. Over that same period, Glenn's opponents who petitioned on spent an average of $702,544.30.

But independents don’t have that option.

Make no mistake -- these changes serve only to keep independents off the ballot and reinforce the power of the two parties in Colorado by eliminating all other competition.

So what can you do about it?

The votes on these bills are happening now. If we're going to make a difference for independent candidates and voters in this state, we need to make our voices heard. Democratic leadership is trying to kick independents off the ballot, without any justifiable reason. They’re protecting the party instead of the people.

Unsure of what to say to your legislator? Try this:

My name is ________ and I live in [REPRESENTATIVE’S NAME]’s district. I’m calling to tell you to amend HB19-1278. It suppresses independent and unaffiliated candidates, and is undemocratic. The bill needs to be changed to represent all of Colorado.

Want to write them? Try this:

Representative,
My name is ________ and and I live in [REPRESENTATIVE’S NAME]’s district.
I’m writing to tell you to amend HB19-1278. Section 16 of the bill suppresses independent and unaffiliated candidates, and is undemocratic.
Independents deserve a choice and a vote in Colorado. Put people over party, and amend HB19-1278.

“Apparently unsatisfied with the many advantages already afforded to the two-party duopoly in our electoral system, party leaders in the state legislature are now trying to rig the rules even further under the guise of election reform.

It is highly hypocritical for the party that claims to care about voter suppression actively engage in candidate suppression by attempting to implement new barriers to electoral competition.

Instead of reducing barriers to the ballot for all candidates under the already chaotic and complex petition system, these lawmakers are putting significant and costly barriers in front of unaffiliated candidates who do not have an option to access the ballot through the assembly process, like their partisan counterparts.

True reform should increase choice, participation, and accountability in our elections process –– not seek to advantage or disadvantage any one political party or candidate.”

We need to make our voices heard. Stand up today - before it's too late.